[Back to Home Page] 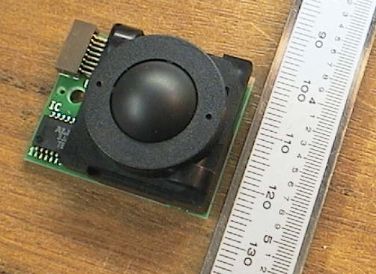 Not much bigger than an inch!

I bought some of these nice little trackballs quite cheap from an Australian electronic surplus components seller; Oatley Electronics. Check out their "bargain corner" or search their site for "track balls" to check the current price, I was told they have good quantities remaining and they WILL sell international.

The trackballs are new and in perfect condition, they appear to be miniature ALPS brand trackballs as used in early laptop PCs before those boring touchpads became the new standard. They have full UP/DOWN LEFT/RIGHT capability (like a mouse!) but no inbuilt button. They are a fraction over 1" in size!

In my opinion Trackballs are MUCH BETTER than a mouse, because you can mount a trackball on the front panel of equipment (or on the wall like a light switch) and makes a VERY COOL controller for anything that needs 2 things contolled at once...